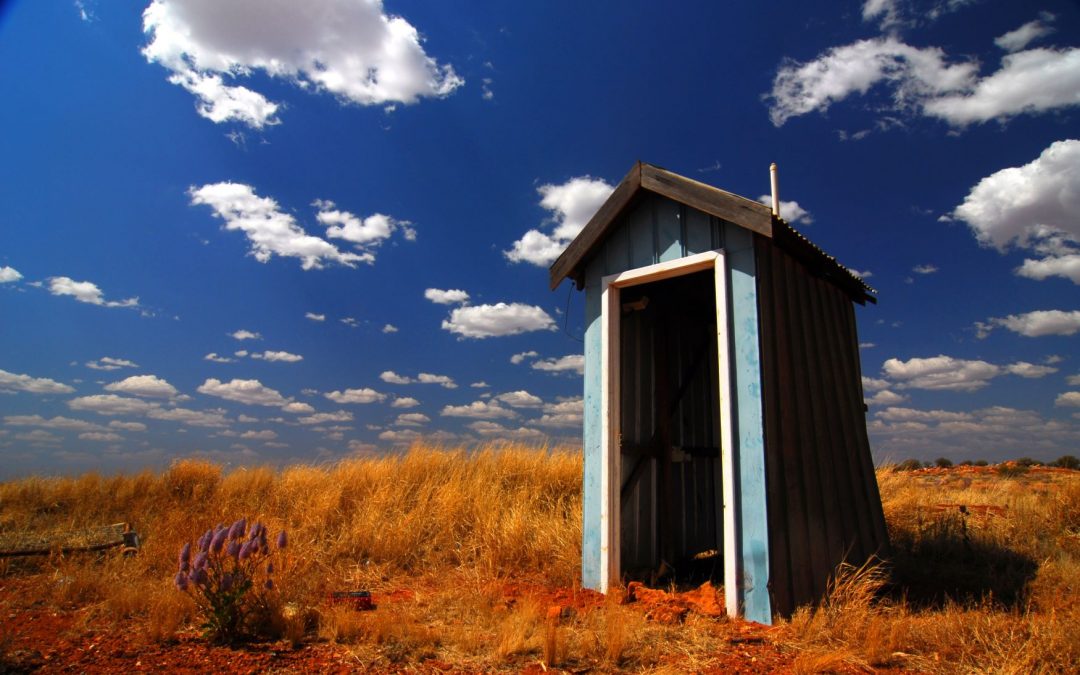 It happened at a tiny, old and very beautiful sandstone church, on one of my first Sundays in the little country parish. The church sat strategically on a rise in the midst of rolling, grassy paddocks. A herd of brown and white cows grazed lazily in the field next to the church. It was picture postcard perfect.

As I drove along the dusty road to the church that Sunday morning, I began to feel in need of a loo. The closer I got, the more urgent the need became. I wondered if I’d make it …

I sped into the church grounds, screeched to a halt and leaped out of the car – only to realise I had no idea where the toilet was. The warden had just arrived, so I raced over to him, and said in desperate tones ‘Where’s the loo?’

‘Bottom of the paddock, love’, he said grinning, his thumb indicating a little corrugated iron outhouse, listing slightly, nestled against the fence a good hundred metres away.

Groaning inwardly, hurrying as much as one can in ankle length robes, I made a beeline for the dunny. When I reached it, I was shocked to find it only had three walls – and no door. Admittedly, the walls effectively shielded the user from the eyes of the parishioners, but not from the cows in the paddock!

The convenience on offer was a wooden box that spanned the width of the dunny, concealing the smelly pit toilet. The little room was decorated with spiderwebs and weeds, with blowflies buzzing cheerily in stereo. The top of the box contained a round, toilet-seat-sized opening, snugly fitted with a wooden plug. A 2×4 spanned the diameter of the plug, to aid in its removal.

Now bordering on agony, I grasped the 2×4 and pulled. It was stuck. I grabbed it again, yanking hard. It still didn’t budge.

‘Maybe it unscrews?’ I thought, desperately attempting to wrench the plug anti-clockwise. It seemed welded shut.

‘AARRGGHH!’ I cried inwardly as I yanked repeatedly.

Suddenly the plug gave way, shooting into the air. From that second, I saw everything in slow motion: the plug sailing gracefully upwards, reaching the limit gravity placed upon it; then, spinning slightly, plummeting down again and disappearing completely into the hole.

Dumbly, I contemplated the empty space, realising that the lid would need to be extricated before I could experience relief.

There was nothing for it. I rolled up the sleeve of my pristine white robe, and plunged my arm into the pungent darkness. Fortunately the plug had become wedged just above the top of the pit, so I was able to fish it out, put it to the side and do what I came to do.

At this point, I need to mention the cows. They are very curious creatures. By the time I had won the battle of the dunny plug, and sighed in relief, they had gathered at the fence in a silent, munching line, solemnly watching my every move.

By now, it was two minutes to starting time. I inspected my hands, and said to no-one in particular, ‘with these hands I must celebrate Communion’, and hurried off in search of the water tank.