In Memory of St Saviour’s Quaama 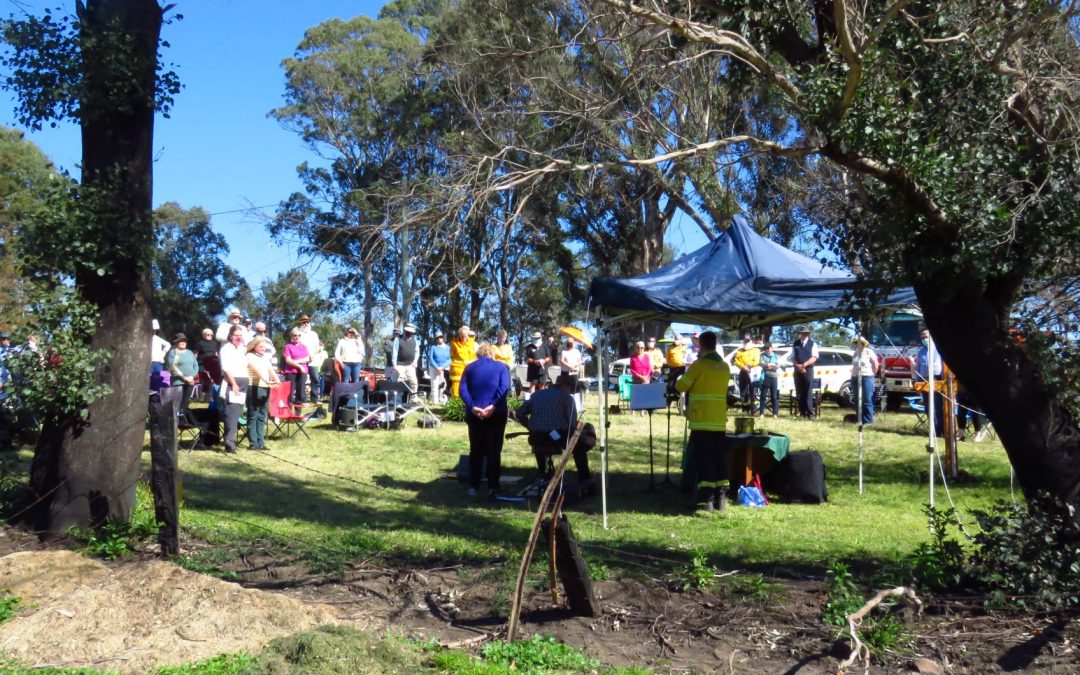 Amidst the trauma of the loss of many homes and livelihoods that occurred during the firestorm unleashed on our district in the small hours of New Year’s Eve, came the destruction of one more building; the loss of which caused no injuries and caused no deprivation. It is one that, nevertheless, has left a gaping hole, physically, figuratively and spiritually in the small village of Quaama.

The Quaama Anglican Church of St Saviour’s was dedicated on Thursday 7th November 1907 after many years of false starts and fund-raising by the people of the area. It was a significant structure in those days and was the first to impose itself on the view of anyone travelling south through the village along what was then the undiverted Princes Highway.

A report on the opening in The Cobargo Chronicle stated;

‘… The Church is without doubt one of the prettiest on the South Coast. Luncheon was then partaken of, there being about 150 present. The Quaama Ladies left nothing to be desired.’ 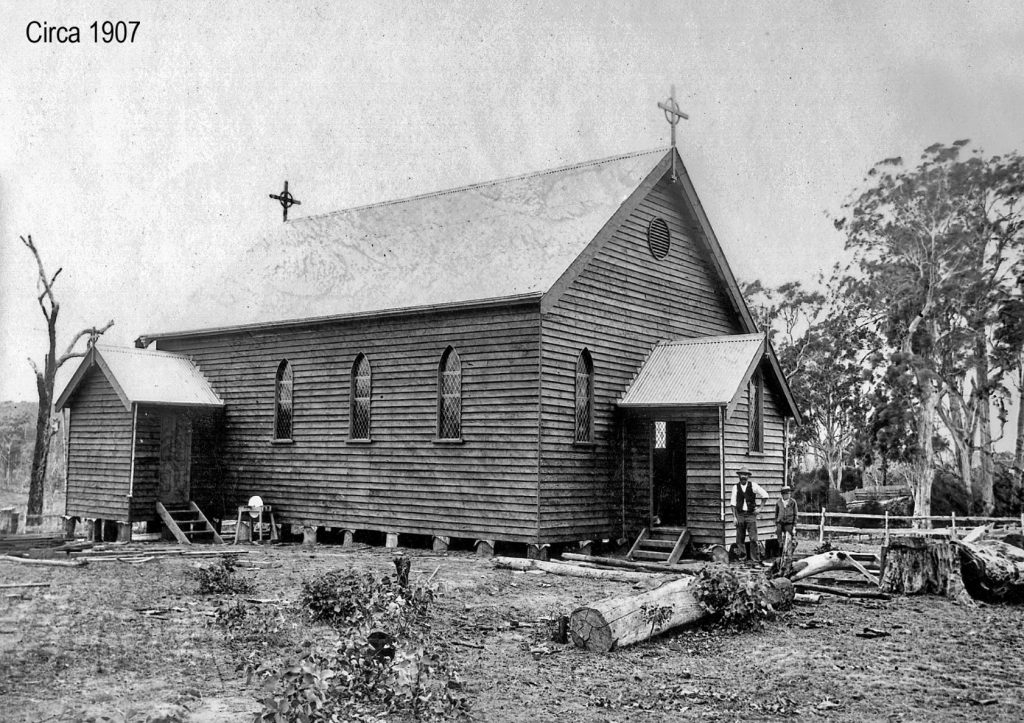 It served the Parish of Cobargo (and Bermagui and Quaama) well in those years, but it took a century for it to get its own toilet. Only recently it had acquired a new roof and a repaint.

A regular event over the past decade has been the parish’s Blessing of the Fire Fleet, which was frequently held at Quaama. Up to a dozen trucks would park in the grounds as a service was held, the trucks and crews were liberally doused by the minister and everyone tucked into a barbecue lunch. As they did a century before, the ‘Quaama Ladies’ would leave nothing to be desired.

One of the greatest positives to come from those horrendous fires was that none of our local RFS firefighters were harmed. Our prayers were answered. 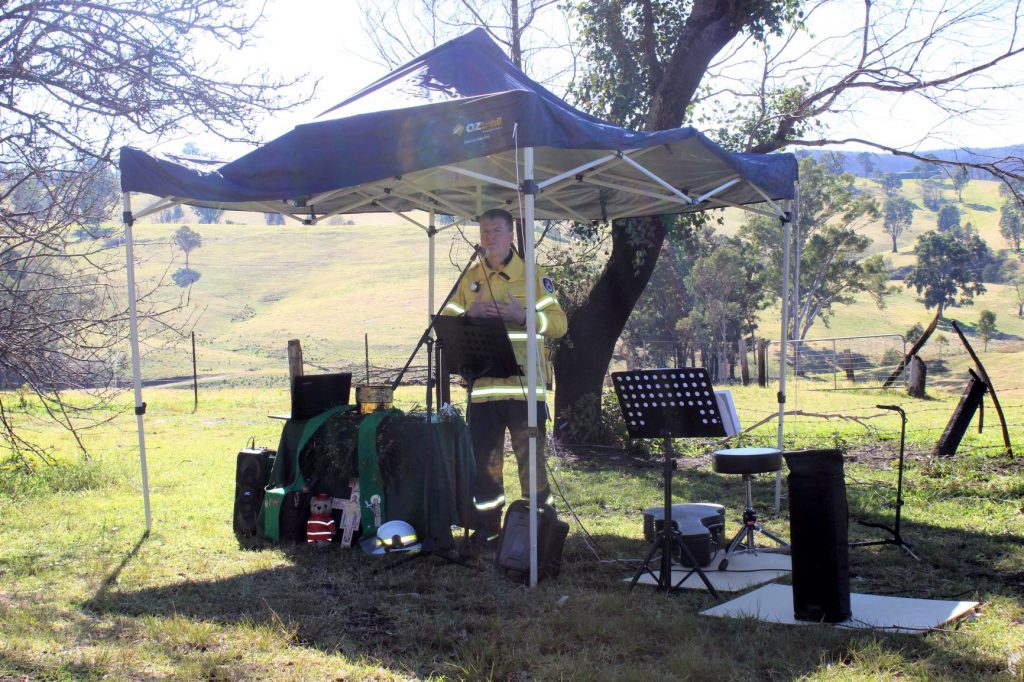 The heat of the fire left almost nothing of what was in the church, and only twisted remains of its ironwork. The fine Inskip memorial window, with its quotation from the book of Revelation, dedicated along with the church in 1907, was vaporised; most of the brassware too. A small melted blob is all that remains of the solid brass cross that graced the altar. Parts of the offertory plate, a fragment of a memorial plaque, most of the top of the candle snuffer (we also found the fire extinguisher!) and sundry other remnants were gleaned from the ashes.

Entirely untouched among all this ruin was the handrail, completed only months before, on the ramp that led to the melted toilet block; and in the corner of the grounds, the bell still hung in its little tower, ready to ring again.

And what of the memories of the 113 years that this building had existed to serve the people of Quaama? How many happy baptisms, joyous weddings and sorrowful funerals had it hosted in those years? How many people had passed through its door seeking spiritual solace and a place of peace? Its high, barn-like interior had lovely acoustics. It is missed by its congregation.

In the days afterwards, messages came in from far and wide from those who have fond memories of the church and of its significance in some part of their lives.

Nevertheless, worship is continuing in Quaama. Until COVID-19 came along it was in the basement of the village hall. Due to its confined dimensions we had to discontinue that outreach. Then on August 30th 2020, as Spring warmth came two days ahead of its time with bright morning sunshine, over 70 people gathered once more on the site where St Saviour’s church had stood. The outline of the church still lay as a bare and barren rectangle and the trees surrounding it sported the charred trunks that they will carry for life, but they also proudly displayed the epicormic growth that is the legacy of their resilience to fire. God’s creation is a wonder to behold.

A stout new post and rail fence circled the slowly re-emerging garden of Churchwarden Richard Parker’s neighbouring home; a sign of the slow recovery of our human condition. 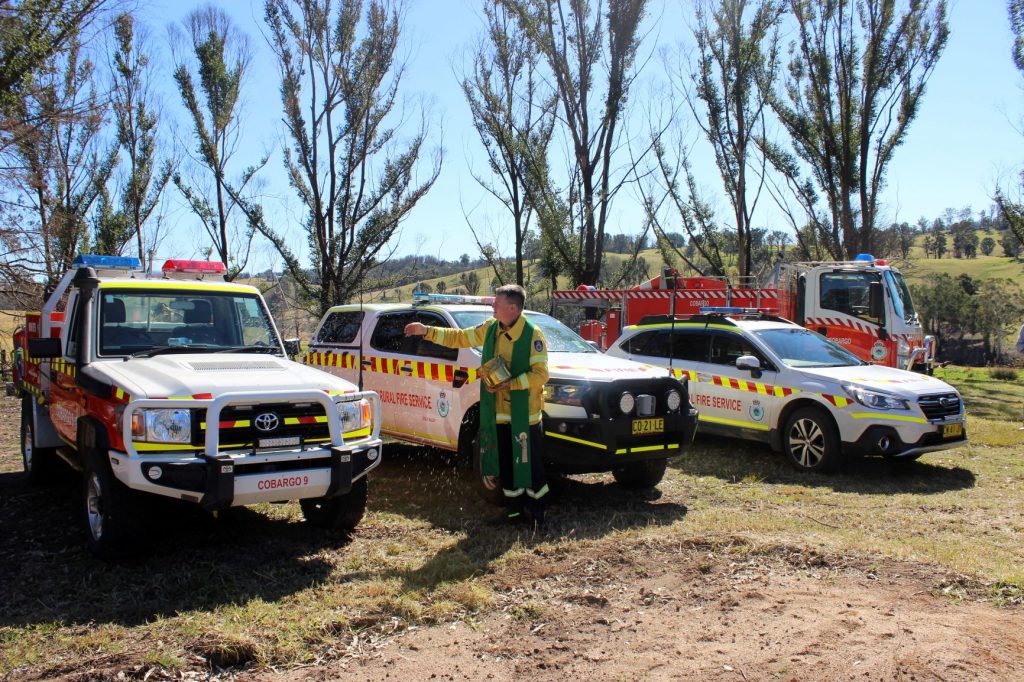 Representatives of the local fire brigades came in their yellow uniforms, bringing their trucks once more to be blessed. Cobargo Scouts brought a sense of Australian normality to the gathering with a sausage sizzle; the tempting aromas of which drifted across the carefully distancing crowd, penetrating COVID resistant masks and starting stomachs rumbling. The sweet products of parishioners’ kitchens were piled ready for consumption with the tea and coffee as the urn came to the boil. But before any of this could be enjoyed, it was time to reflect and remember.

Reverend Tim Narraway, himself a member of our local RFS, organised and led the service of remembrance and thanksgiving. After an introduction and an Acknowledgement of Country, the southern area RFS Commander, John Cullen reflected on the long connection of his and other long-standing local families with St Saviours, before reading 2 Corinthians 1:3b-4: ‘… the Father of compassion and the God of all comfort, who comforts us in all our troubles, so that we can comfort those in any trouble with the comfort we ourselves receive from God.’

This set the theme for the service; of a God who in providing us with comfort, gives us the strength to be able to support others, something so much in evidence during the dark days of January 2020, as the communities of Quaama and Cobargo and the surrounding areas gave succour to each other, organising their relief centres and re-organising lives and livelihoods shattered by the destruction of New Year’s Eve.

After prayers of adoration and confession, the words from the next reading of Isaiah 61: 1-3, ‘a crown of beauty instead of ashes’ were those which many local people justly deserved. 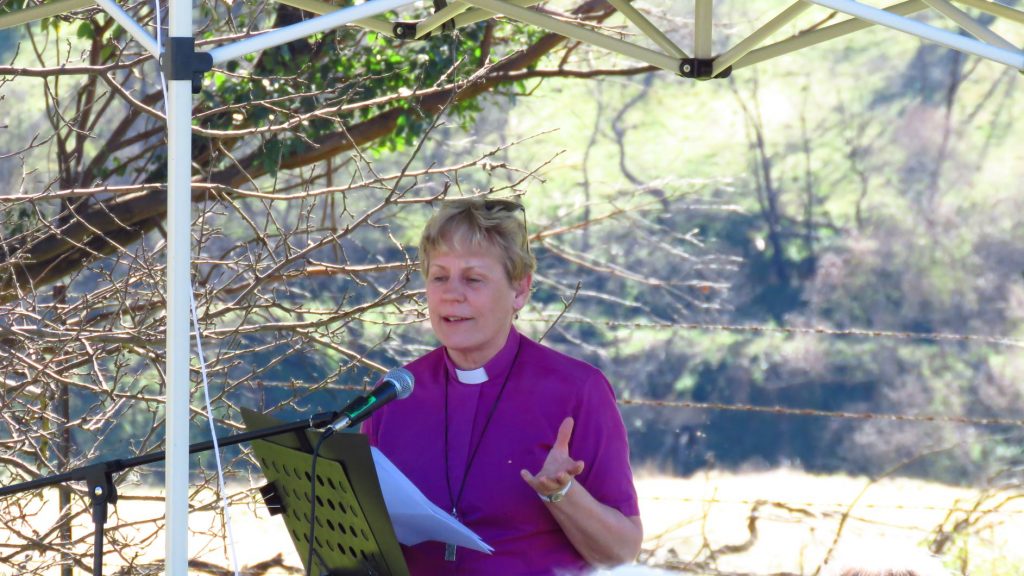 The keynote message was given by Bishop Carol Wagner, whose life has been entwined with that of our parish for many years. She too reflected on the connections that113 years of history had forged between the community and its church building. She spoke of the new life that God offers to those from whom everything has been taken, expanding on the words just heard from Isaiah:

‘Do not remember the former things, or consider the things of old. I am about to do a new thing; now it springs forth, do you not perceive it? I will make a way in the wilderness and rivers in the desert.’

With the vision from Revelation of a ‘… new heaven and a new earth …’. Bishop Carol drove home the message of hope and renewal in the Lord, for all eternity; from whatever dark depths we come. 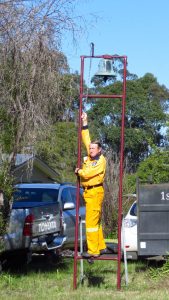 In conclusion, she exhorted us to be bold and imaginative with the opportunity for physical renewal too, as the parish and community formulate plans for the grounds on which we gathered; not to be wedded to seeking to try to replace what was lost, but to be creative in pursuing mission and ministry through whatever outcome will promote it to the full.

Sacrificing for the good of others is central to Christian belief. The church building rendered one last service at its destruction. Richard Parker, churchwarden and local fire brigade member, was alone defending his home, which is close next door. He witnessed the high building absorb the tremendous blast of heat and flame that was coming for him, enabling him to save his home with small damage and saw the homes behind his on that side of the street remain intact.

The building did not die in vain; the Church still lives, and it was Richard who rang again the bell that heralded its return.

by Alan Burdon and Fiona Kotvojs