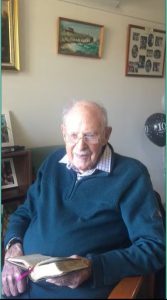 Huge congratulations to the Reverend Joe Mullins who celebrated his 100th birthday on 16 July 2020. Such a significant milestone in years and ministry – 70 years a Deacon and 69 years a priest since his ordinations in London. Our colleague the Reverend Robert Willson wrote the following message about Joe to share with you.

‘Joe was born in 1920 and recently celebrated his 100th birthday in the Goodwin Homes at Monash. He served in the British Army in the Burma Campaign under Field Marshall Sir William Slim and Joe was awarded the Military Cross. Many years ago I invited him to a Chapel Service in the Girls Grammar School and he showed the girls his tin helmet with a bullet hole in it, a reminder of how close he came to death.

After the war he studied at Oxford University and gained an Honours BA and an MA and was ordained in the Diocese of London. One day we had a long conversation about his Oxford years. Joe served for many years in India, including ten years as a Scripture Union missionary.

Joe and Edith and their family arrived in this Diocese in 1974 and Joe was appointed Associate Priest and then Rector of Weston Creek for eight years. His strong evangelistic ministry helped to lay the foundations for the building of the present St Peter’s Church. After further service in North Goulburn, Pambula and Wanniassa, Joe retired in 1987.

Members of the Diocese who have been blest by the Ministry of Joe Mullins will give thanks to God for his work and witness.’