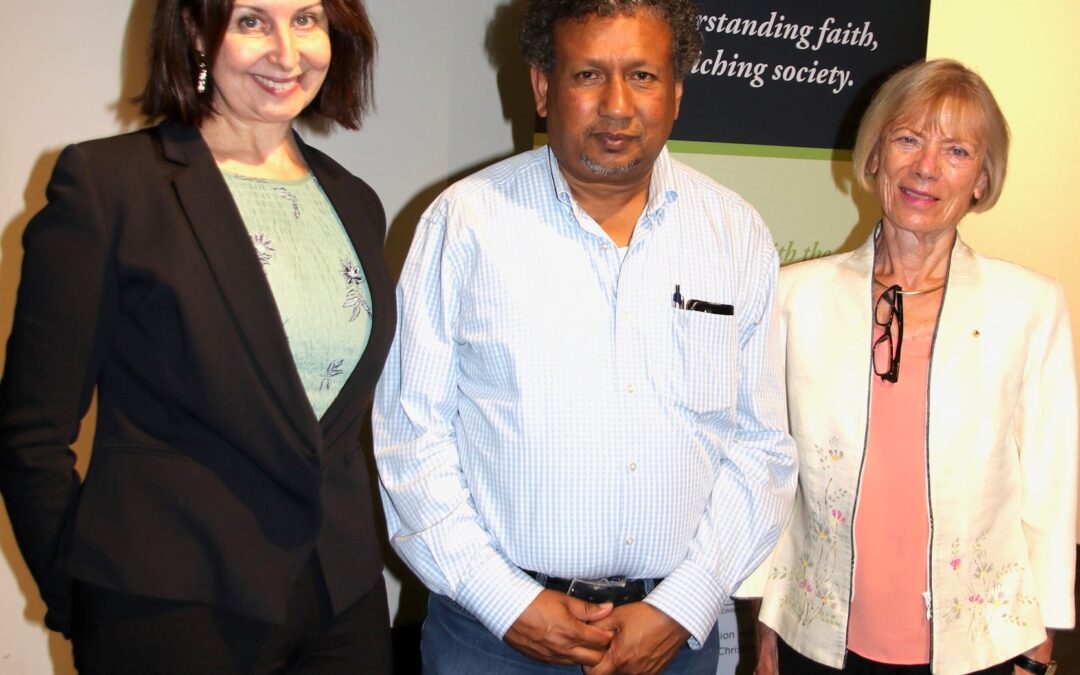 Many years ago, on key city corners in Australian cities, young boys would stand as town criers with their unique lingo Extra! Extra! Read all about it! On a street corner site abutting the Parliamentary Triangle in Canberra recently a group gathered at the Australian Centre for Christianity and Culture, on February 16, to hear from two of Australia’s significant town and nation’s criers, at a Christians for an Ethical Society lecture event. The subject was Makarrata, truth telling and justice for First Peoples: is there a way ahead?

Makarrata is an indigenous word meaning a coming together after a struggle. It encompasses the processes of conflict resolution, negotiation, peace-making and justice. It is part of a contemporary songline of healing, acknowledging something has been done wrong and it seeks to make things right. It is the new lingo of the biggest story of our day in this land, shared between Indigenous and non-indigenous Australians.

The speakers were Professor Asmi Wood, a proud West Torres Strait Islander man. He is a multi-awarded teacher and Professor of Law at the ANU. He lectures at the ANU College of Law with expertise in legal ethics, constitutional law and the treatment of Indigenous peoples within legal frameworks other than their own normative systems.

Professor Wood began with the reminder about a legal fiction and a lie. The fiction and the lie are that the land at the time of white settlement in Australia was unoccupied, empty and that its inhabitants were few and sub-human. This legal fiction was articulated and upheld by the British Privy Council in 1870, part of a long process of perpetuation of the legal (and on the ground) fiction that Aboriginal people never owned land and therefore could not bestow it on another. From Indigenous perspectives sovereignty was inalienable to its Indigenous owners and written in the law and in the land and within the hearts and flesh of its people. It has never been, and could never be ceded. Makarrata, he said, is a framework for creating justice and is comparable in law, scope and impact to the Magna Carta.

His remarks were in respectful interaction with and response to Felicity McCallum from Charles Sturt University. She is an Awabakal woman (Newcastle NSW region) who is currently researching Indigenous-British engagement and reconciliation in Australia for her PhD.

She described Makarrata and the Uluru Statement from the Heart of May 2017 as ‘an international transcendent arc’ which opens our eyes to a new transmission of crucial knowledge. This for us now, and for our ancestors. It models, she said, a form of diplomacy and opens a way to breathe for Aboriginal people.

In the interaction with the audience that followed it was noted by the speakers that where there is high rivalry and tension in a combustible, unbalanced situation the reaction can be madness. (Think accusations of the Statement from the Heart being an attempt to create a third Parliamentary chamber.)

For Aboriginal and Torres Strait Islander people sovereignty was never ceded. This raises for all of us wrongs that are uncomfortable and questions about how they may be made right.

The solutions are legal and within standards of international law as well as Australian law. Deep questions are raised by treaty, compensation for losses, free and unforced ways forward. Professor Wood predicted this would not be a quick process. It is, he said, a matter of time and of preparing Aboriginal people, community by community. He likened the protracted (and conflicted) process to that of the six states federating, and the need for fairness, time, skill and imagination. Being upset is part of the story. Part of the way forward is to feel the pain and not run away from it. To tell the story.

And so, for those privileged to be present the town crier’s story belongs to all of us, with Makarrata the new lingo, calling us all—in relationship—to create a new way.

The video of the forum can be found on the CES website (http:// ces.org.au/makarrata-truth-telling-and-justice-for-first-peoples-is-there-a-way-ahead/)