The Legacy of Burgmann 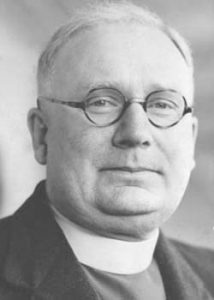 While readers of Anglican News may be understandably hazy about the stories of some of the previous bishops featured in this series (or indeed even the names of some!), the same is much less likely to be true of Ernest Henry Burgmann. Though it is already more than 50 years since Bishop Burgmann’s death (March 1967) and close to 60 years since the end of his episcopate (which spanned from 1934 to December 1960), he is still remembered by many, and his name is commemorated in the Burgmann Anglican School and ANU’s Burgmann College.

He was born in 1885, the first bishop of our diocese to be born in Australia. Growing up on the NSW nor th coast, he left school at an early age. Despite this background he made opportunities for self-education, including the study of Greek, and completed his formal education somewhat later. He was ordained in 1911 (deacon) and 1912 (priest). The following two decades were mainly spent in several parishes in Newcastle Diocese and as Warden of St John’s College Armidale (later Morpeth), before his consecration in 1934 to be our fifth bishop.

His episcopate of more than 26 years covered a significant period in Australian history. He took on the task in the midst of a lengthy economic depression, and continued through the war years and into the post-war reconstruction of Australian society. They were years of significant growth for Canberra, with the bishop’s residence moved to Canberra in 1947 (not without controversy) and the diocese renamed Canberra and Goulburn in 1950.

It is impossible in a short article to offer a satisfactory assessment of Burgmann’s legacy. Two points of focus will have to suffice. One is his interest in education. This is acknowledged in the two Canberra educational institutions which commemorate his name. It is also seen in his promotion of St Mark’s National Theological Library which opened in 1957 and of which Burgmann was Warden even after the end of his episcopate. At the parish level the Church Mail Bag School flourished in the diocese during Burgmann’s time, providing religious education to thousands of children in more remote areas. Methods have obviously changed, but the need of appropriate education at parish level and in ministerial formation remains the same.

A second and well-known element of Burgmann’s legacy is his promotion of social justice within a concern for the church’s wider role in society. He is known as a polarising figure who was often in the news. He was described as a “meddlesome priest” and a “red bishop”, the latter in response to his socialist leanings, including an unfashionable wartime support of the Soviet Union and opposition to the post-war move to ban the Communist Party in Australia. But that issue aside, he was meddlesome in ways which we might consider very appropriate, even if not appreciated by those who insist that religion and politics must be kept separate. He considered that the church needs to play a significant, even decisive, role in society, in matters such as education and welfare, and in environmental concerns, somewhat ahead of his time. One might criticise a lack of detailed practical programmes or lack of theological depth in some of his positions, or his championing of bishop and diocese rather than parish as the core element of Christian influence in the world. But one reminder we undoubtedly need is that our faith needs to be outward looking, not just a matter of personal piety or preservation of our comfortable parish life, but a concern to make a difference in our world. In the current hostile climate towards religious institutions, we may be tempted to withdraw from wider engagement and seek security within our own circles, but Burgmann would presumably want to encourage us to persevere in our calling to be the salt of the earth and the light of the world.

NB. This is the third article in the series Know Your Bishop, which is not being published in order.