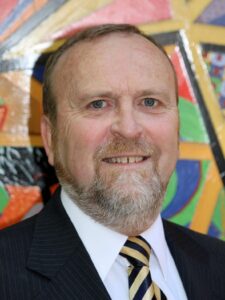 Colin May is a highly regarded educator and experienced Principal of more than four decades. After a long teaching career in Primary and Secondary Education at St Andrew’s Cathedral School, including establishing ‘Kirrikee’ Outdoor Education Centre, and Trinity Grammar School, he became the first male Principal at Arden Anglican School at Beecroft. Over a period of 17 years he led the development of the school from a Primary School at Beecroft to a three-campus Preschool to Year 12 school with campuses in Oxford Street, Epping, and a Senior Study Centre in the Cambridge Business park. He retired from Arden in 2009.

Colin was also Principal at Al Sadiq College from 2011 to 2014 and at the Italian Bilingual School in 2015, then assisted with enrichment Programmes at the Kesser Torah College in 2016, which saw him honoured by the Teachers Guild of NSW with the award of an Honorary Fellowship (HFTGN) in that year.

He was most recently the Principal of the Sapphire Coast Anglican College from 2017 to 2018 and leads an educational consultancy practice, New Horizons Consulting.

In addition to his leadership roles, Colin has held office in a variety of School and Independent School associations. He is a Fellow of the Australian College of Educators, Inaugural Fellow of JSHAA (Junior School Heads’ Association of Australia), an Australia Day Rotary Merit Awardee for services to education and a recipient of the Rotary Vocational Excellence Award and Life Member of the NSW Independent School Sport Association for services to school sport. He has been a Sportsmaster, Outdoor Education Director, coach and referee of many sports.

Colin is as passionate about education today as he was at the outset of his career. He has always prioritised the welfare of students and encourages each child to fulfil their potential by fully immersing themselves in the rich life offered by schools and their communities. His Christian leadership and encouragement of young men and women in faith has been a hallmark of his teaching.

Colin has long been an active member of the Anglican Church, serving in numerous roles including Chair of the St John’s Bega Parish Council to 2018 and currently worships at St John’s Beecroft. He has is also Chairman of the Board at The Riverina Anglican College in Wagga Wagga and a member of the Canberra Goulburn Diocese Education Commission.

Colin is married to Kay, and they have four adult children and 10 grandchildren.