Mission from the Centre – the Vision of Bishop Barlow 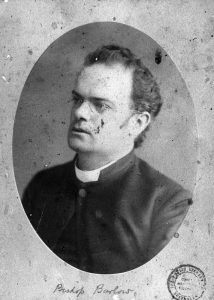 He was the first Australian bishop to be ordained in Australia, the first without a university degree and the first to own a car. It’s not necessarily the stuff of legend, but it does suggest that Bishop Christopher Barlow was part of a pioneering age in an Australian church seeking to establish itself in the Great South Land.

Stanton’s influence on Barlow was immense, shaping his later episcopacy in Goulburn Diocese. Though an evangelical, Stanton was more attached to the wider church than to any party within it. He saw the Church of England as having a genius for preserving Christian orthodoxy in diverse settings. As Stanton put it, this church was:

‘Catholic in her retention of primitive faith and practice, Protestant in her rejection of mediaeval accretions; firm, yet flexible … Its Liturgy and Formularies bearing the strata of thought and devotion deposited through the centuries of changeful  experience. [This church is thus] constitutionally capable of forming affinity with the mixed elements of colonial religious life.’

In other words, Anglicanism had the capacity to nourish Christian faith in the mission field of Australia while maintaining its organic connection with the wider Christian story.

This was the vision of church life Barlow embodied. When he arrived in Goulburn in 1902 he saw himself as bolstering the sensible, orthodox centre – not the partisan fringe. He denounced the ‘spirit of party, with all the suspicion and lovelessness and infinite pettiness which it brings’.

This was not only true to his instincts. It was also critical for mission.

He was the bishop of a bush diocese largely cut off from the wealth of the city and facing a diverse, thinly-spread and spiritually disengaged population. Churches in big cities might survive pulpit polemics, but in the more dispersed and practically-minded populations of rural Australia, party spirit and hairsplitting theological arguments were an indulgence his church could not afford.

Barlow’s hatred of sectarian church warfare was the result of two equally strong commitments: a strong evangelical impulse to preach the gospel of Christ, and an equally strong catholicity which understood the church as being united by central Christian orthodoxy, not party positions.

Barlow was a gifted preacher and evangelist with a great passion for engaging the ‘typical Australian’ with the good news of Jesus Christ – skills he had honed among the mining communities of Charters Towers. But he was sometimes frustrated by the inability of his clergy to show the same spirit.

He lamented of some, that ‘the less they have to do the worse they do it … The ministry of word and sacraments is not a ministry, but a mechanism…’. He railed against the ‘unctuous nobodies’, ‘pious noodles’ and ‘soft milksops’, whom he saw as manifestly ill-suited for mission in the Australian context. (This explains his attempt to set up a theological college in Goulburn – an act of foresight, but one whose time had not yet fully come.)

His challenges were many: constant financial strain, huge distances (hence the car!), poor health and even the loss of his personal possessions in a fire. His naturally gregarious nature and robust constitution began to show signs of strain.

The crushing burdens of episcopal ministry were lifted from his shoulders in 1915 when he retired and shortly afterwards went
to be with his Heavenly Father.

In an age when we face many of the same challenges, Bishop Barlow’s legacy is honoured wherever the good news of Christ is
proclaimed by a church standing united on the firm foundation of apostolic faith.

NB. This is the second article in a series on Know Your Bishop, which is not being published in any particular order.