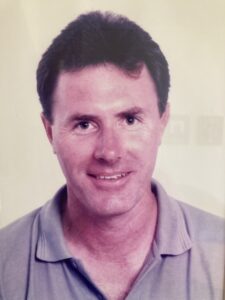 Thirty years after commencing work at St Martin’s College at Wagga Wagga, Reverend Glenn Maytum returned in April to be Acting Head of College while Susan Bazzana went on holidays.

Glenn was instrumental in the establishment of St Martin’s, which will host its 30th anniversary celebrations on 17-18 September this year.

In 1989 Glenn had been in conversation about re-starting Anglican Chaplaincy at what was then called the Riverina-Murray Institute of Higher Education (which became Charles Sturt University). In 1990 he received a phone call from Bishop Barry Hunter (then Bishop of the Riverina) who wanted his help ‘to solve a problem’.

The Bishop had received a bequest from Mr George Tassell, a parishioner at St Martin’s Anglican Church in Moulamain, which had been earmarked for ‘youth’ and Glenn’s suggestion was to see if it could be possible to commence an Anglican Residential College on the campus at Wagga Wagga.

In what was a unique project at the time the Dioceses of Riverina and Canberra and Goulburn came together to work on the project, which was spearheaded by Archdeacon Stephen Williams, and in 1992 the College was opened in time for the start of the academic year.

Glenn was commissioned as its first Chaplain and moved onsite into the Chaplain’s Flat, which was attached to the Chapel. The first residents lived in an eight-bedroom cottage that was called ‘George Tassell House’ in acknowledgement of its benefactor.

‘We started with eight residents 30 years ago and now it can house 96 people and the community is thriving.’

‘I am really looking forward to the 30th anniversary and do hope to see many of those residents from the early years come along.’

Tickets to the various 30th Anniversary events will be available soon on the College website or you can contact the College via martiesturns30@csu.edu.au or telephone ph 02 6933 4966.