The Governor and the Priest at Lake Bathurst, 1820

I greatly enjoy reading the journals and records of the early European explorers in Australia. We must never say that they ‘discovered’ various features such as mountains, lakes and rivers. These were known to the indigenous peoples from the beginning. European explorers simply named and mapped them, often not bothering to record the traditional name.

Governor Lachlan Macquarie, born on the island of Mull in Scotland, and after long military service in Canada, India, the East Indies and Egypt, served as Governor of NSW from 1810 to 1821. His name appears many times on the map of Australia. He was an enthusiastic explorer and traveller.

1820 was an important year for the energetic Governor. Earlier that year he laid the foundation stone of the first official place of worship for Roman Catholics in the Colony, the genesis of St Mary’s Cathedral. That year he also decreed that all traffic, carts etc, should keep to the left on the roads, a rule we still follow. Then he took a trip to the South to see what they called ‘the new country’.

On Sunday 29 October, 1820, in the presence of Macquarie, the Reverend Robert Cartwright conducted the first Christian service in what is now the Diocese of Canberra and Goulburn.

On Sunday 29 October, 1820, in the presence of Macquarie, the Reverend Robert Cartwright conducted the first Christian service in what is now the Diocese of Canberra and Goulburn. It was on the shore of Lake Bathurst and today a memorial in the shape of a Celtic Cross marks the place. Plans to hold a service to commemorate the 200th anniversary of this event had to be abandoned because of the pandemic, but we should not forget this important anniversary. 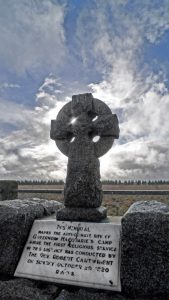 Memorial at the location of the first church service at Lake Bathurst.

The full story of that journey by the Governor and his party is recorded in Macquarie’s Journal of a Tour of Inspection of the Western and Southern Counties … 16 October 1820 – 6 November 1820.

The manuscript may be found at A782 in the Mitchell Library. For the 60-year-old Governor, it must have been an arduous expedition. As the famous biographer of Macquarie, MH Ellis, wrote: ‘his story, full of records of vicissitudes, of exposure, of lost horses, and of the jolting travel of a journey for which the road was being cut just ahead of him, show the strain of such an expedition …’ Ellis wrote a life of Macquarie that is one of my favourite books.

Macquarie’s Journal describes the commencement of his inspection tour. On Monday 16th October, 1820, he set out in his carriage, accompanied by Major Antill, Lieutenant Macquarie, Mr Meehan the Deputy-Surveyor, the Reverend Mr Cartwright, Dr Reid and Mr Charles Throsby. Cartwright was the Church of England parson at Liverpool and they apparently picked him up on the way. I have researched Cartwright’s long and colourful life.

They stayed briefly at Charles Throsby’s home at Bong Bong. Throsby had played a large part in organizing the Governor’s visit to the southern counties. The expedition bypassed the present site of Goulburn and reached Lake Bathurst on 23rd October. There they were joined by another party coming overland from Bathurst led by Mr Commissioner Bigge and with the Surveyor-General, John Oxley, in the party.

I have a particular interest in Oxley. He was the first European Explorer to sight the Warrumbungle Mountains where I lived as a child. He was the father of three children born out of wedlock before he married, and was also a very active member of St James’ Church, King Street, Sydney (when he was home from his travels).

From Lake Bathurst Macquarie and his enlarged party travelled to a much larger lake which the Governor named Lake George, after the then reigning monarch. At first I wondered if this would be George III or George IV. As George III died on 29 January of that year news would have reached the Colony that his son George IV was now the King.

Governor Macquarie described the beauty and rich wild life of the lake he had named after George IV. Of course, he did not bother to wonder if the aboriginal people of the district would have had their own name for this important geographical feature.

In fact the local traditional owners were members of the Budawang tribe. Their tribal area is from Conjola in the north, to Lake George in the west and the Moruya River in the south. Like the firebrand Presbyterian cleric, John Dunmore Lang, I believe that traditional names should always be preferred and Lake George should be known as ‘Weereewa’, but it is probably too late to change it now. The traditional name of Lake Bathurst is ‘Bundong’ but it was named ‘Lake Bathurst’ after the British Secretary of State for Colonies, who never set eyes on the place.

Reverend Robert Cartwright from the NSW State Library Collection.[/caption]But this rich aboriginal heritage was clearly in the mind of the Reverend Robert Cartwright on Sunday 29 October when the whole party gathered for a service of Christian worship in front of the Governor’s tent on the shore of Lake Bathurst. The service was probably Evening Prayer from the Book of Common Prayer. 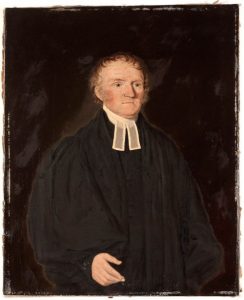 Governor Macquarie recorded that Mr Cartwright gave a very appropriate sermon on the importance of ‘civilising the natives of the country and settling them in townships’. With the language barrier no one thought to try to ask any of the local people what they thought of such a plan.

Cartwright was a native of Shropshire, England, and was ordained in 1794. After study at Oxford and many years as a curate in Bradford, Yorkshire, he was encouraged by Samuel Marsden to come to NSW, and arrived in 1810. He was well aware of the disastrous impact of European settlement on the people who had lived peacefully in the continent for thousands of years.

While his vision remained just a dream, his concern and compassion for them was a lifelong reality. Cartwright had a simple but very strong evangelical faith. He constantly reached out to those on the margins of society with the love of Christ.

He died in December 1856 in Goulburn shortly after he met Bishop and Mrs Barker on their travels. I commend the short biographical entry on Cartwright by Professor Cable in the Australian Dictionary of Biography, Volume 1, pp 211-212.

Governor Macquarie had hoped to reach what we know as the Murrumbidgee River but it was too far away, so he and his party packed up and began the slow journey back to Sydney. Little did he dream that one day, just a few miles to the south of his camp beside Lake Bathurst, a great city would rise, with a national parliament and a suburb to be named ‘Macquarie’ after him. Canberra would bear an aboriginal name said to mean a ‘meeting place’.