Brian Douglas, The Anglican Eucharist in Australia: The History, Theology, and Liturgy of the Eucharist in the Anglican Church of Australia, Anglican- Episcopal Theology and History, Vol 8 (Leiden, Koninklijke Brill NV, 2022). 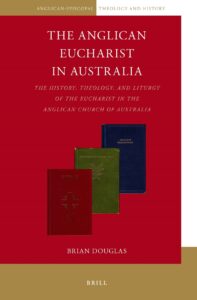 This book is subtitled The History, Theology and Liturgy of the Eucharist in the Anglican Church of Australia. The book is a very important contribution to Australian Anglican history and is a scholarly exploration of a theme that has never been previously studied. Dr Brian Douglas, retired Archdeacon in this Diocese, is to be congratulated on a pioneering study of a neglected subject.

As I know from my own theological training in the 1960s, sacramental theology is almost totally neglected in the formation of clergy in Australia. An Anglican priest is ordained to the ministry of ‘Word and Sacrament’, yet in many cases, while preaching the Word is stressed, celebrating the Eucharist is almost ignored. That sad fact is why this book is so important to help redress this neglect.

The author explores the diverse theology of the Eucharist in the Australian Anglican Church from the beginning of European settlement in 1788. Until the middle of the 20th century the 1662 Book of Common Prayer determined the nature of Eucharistic celebration in Australia. Dr Douglas uses the philosophical notions of realism and nominalism as a focus in the book. My clergy training, and I suspect that of many others, never mentioned these important concepts.

In a brief review it is impossible to touch on all aspects of this valuable study. The author gives us a fascinating account of the work of early clergy like Johnson, Marsden and Bishop Broughton. The first Chaplains to the Colony of NSW were representative of 18th century Evangelical traditions but the first Bishop, Broughton, and later Bishop Nixon in Tasmania, were influenced by the Tractarians, led by EB Pusey, and espoused a realist eucharistic theology.

Other early Bishops, like Perry of Melbourne, maintained an evangelical and nominalist eucharistic theology. This emphasis was continued by the Diocese of Sydney after the end of Broughton’s episcopate.

This study includes a remarkable account of First Fleeter William Dawes, and his very significant study of Aboriginal spirituality through his friendship with a young Aboriginal girl named Patyegarang. It is a tragedy that many of the papers of Dawes were lost or destroyed after his death, but what remains should help students of realist philosophy to a much deeper understanding of sacramental theology. It certainly helped this reviewer.

The final section of this book explores how the Australian Anglican Church, in spite of very diverse theological traditions, was able to achieve agreement on liturgical reform of the Prayer Book. I was one of the very last priests ordained according to the BCP 1662. Anglican clergy have now encountered successive Australian Prayer Books, but with the advent of modern technology and virtual Eucharists, one wonders what the future will bring. This fine study will shine a powerful and scholarly light on the journey so far, and hopefully will help to overcome the neglect of sacramental theology in Australian Anglicanism.

Brian Douglas has achieved a monumental study. Copies of his book are available in the National Library and St Mark’s Library.