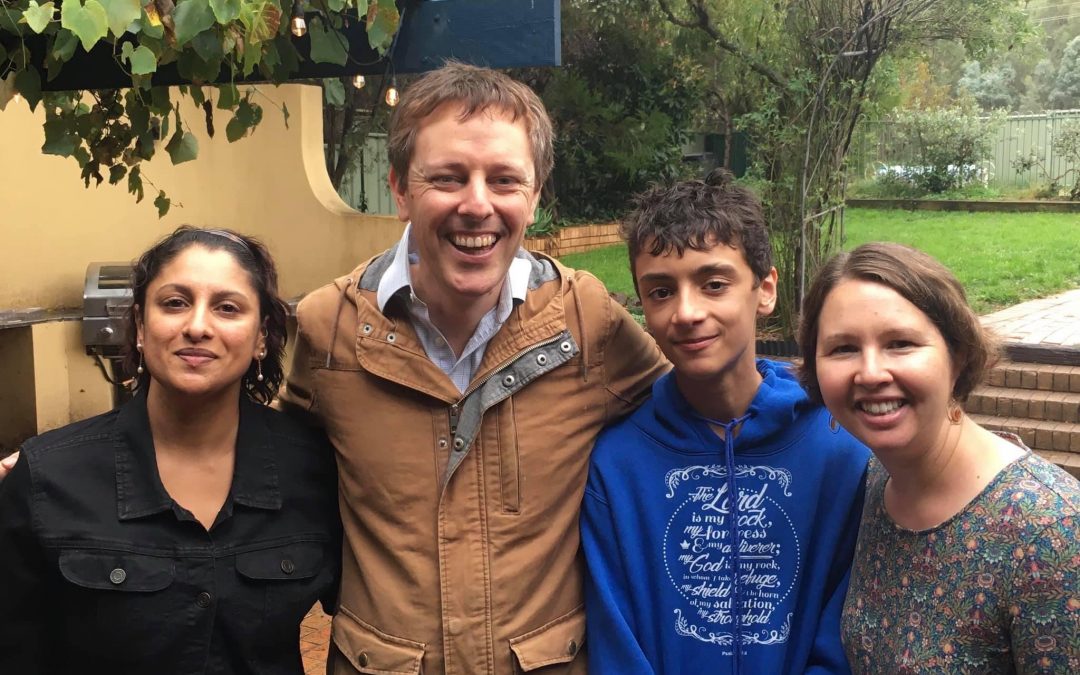 Renew Anglican Church recently celebrated our 4th birthday, and on that day we were thankful to be able to share in the baptism of two members of Renew; a woman, Prabha, and her teenage son, Theo, who have become followers of Jesus over the past few years through Renew. We hope you find it encouraging to read their testimonies, which they shared at church on the day of their baptism. Following their baptisms we sang around the pool together and shared lunch as a church, celebrating the work of God in Tuggeranong.

I was brought up in a Hindu family, but I was not religious. If anything, I had a negative view of religion and the conflicts it can cause and was suspicious of religious institutions. Nevertheless, I felt that there was something ‘more’, something ‘greater’ in this life, but was unsure of what that was.

I started coming to church primarily to chaperone my son, Theodore, to see what he was getting involved in and to make sure it wasn’t a cult! After attending a few sermons, I felt like I wanted to learn more about Christianity, so I did

the 3-2-1 course about Christianity with Anna.

In the several weeks that followed, after wavering back and forth, trying to pray, and spending time reading the Bible, it eventually made sense to me: God sent Jesus to save us from ourselves.

At the same time, I was learning what it was like to be part of a Christian community. I made many close friends here, and I loved the idea of belonging to a Church Family.

The first time I took communion at church, I was starting to believe, but was still conflicted and scared of letting go of the life that I had always known. The second time I took communion, I was completely sure that God exists, that Jesus is real, and I could feel the Holy Spirit. I realised that I wasn’t losing anything by letting go of my old life but gaining so much more.

My life before becoming a Christian had a lot more worry, times of hopelessness, emptiness, and uncertainty. And a lot of fear. I felt that the only people I could depend on were my family, a few close friends and myself. And this caused me a lot of anxiety, as deep down I knew I had no real control over how things will turn out.

I was also very self-critical and felt like I wasn’t living up to both my family’s expectations and my own expectations. I worried a lot more about what other people thought of me.

Life now feels hopeful and secure. I know that God has a plan for me and that it’s okay to not know what the future holds. Whatever lies in store, the good and difficult, God walks with me and I am not alone. I now pray regularly – for help and to give thanks. And my self-worth comes from being a child of God.

I love these words from Titus Chapter 3 Verses 4-7, where Paul writes:

‘But when the kindness and love of God our Saviour appeared, He saved us not because of righteous things we had done, but because of his mercy. He saved us through the washing of rebirth and renewal by the Holy Spirit, whom He poured out on us generously through Jesus Christ our Saviour, so that, having been justified by his grace, we might become heirs having the hope of eternal life.’ 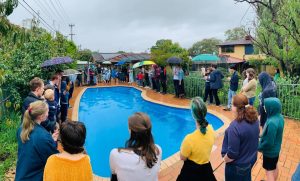 I first began my Christian journey at Renew Youth in 2018. I was invited to go by a school friend. When I first went, I knew nothing about Jesus or Christianity, but Youth was such a welcoming environment and I haven’t stopped going since. One week, our leaders covered the basics of the Christian message. When I heard about God’s love in coming to die for my sin, that was when it became real to me. I realised that I was guilty and Jesus’ atoning death was the only way to be made right with God. It made perfect sense. I didn’t yet have a serious faith, but God had provoked in me a desire to seek Him.

Soon after, I began coming to church with my mum. Hearing the Bible explained through sermons fuelled my newfound longing for the things of God. I realised more and more what it meant to trust in Jesus, and slowly but surely, God’s Spirit began His work.

Before following Jesus, I was very insecure. I sought involvement from others, and I wanted control over everything. I would point the finger at others or at society. I thought having these things would make me happy, but my obsession left me feeling unloved, worthless, and totally unfulfilled. It was the good news of the cross that broke the connection between my works and my worth, turning my old pursuits on their heads. Jesus freed me from my grip on control, on insecurity, and on my need for approval from others. God now brings me fullness of peace every single day.

Pre-Christian me was also a very vengeful person. I would hold bitter hatred and deep grudges against those who wronged me, and I was not at all forgiving. The Lord quickly addressed this problem in my heart. When I beheld the reality of Jesus’ grace – that He would have mercy on me, a terrible sinner – I began to show mercy to my own enemies. Knowing God’s faithfulness has enabled me to truly love my neighbour. He has changed me from a bitter, angry person to a forgiven forgiver.

But in many ways, I was still unchanged. The environment of my new high school had negative effects on me. I struggled to let go of the desire to fit in, and moreover I became supportive of people expressing sexuality not in line with God’s ways. But over time, God was prompting and convicting me that I had to make Him my first priority. During the bushfires of 2019/20, I finally surrendered my whole life to Jesus. I went back to school the next year as a realised, cross-bearing Christian.

Next, God had me go through a period of depression. Depression was like a storm cloud of sorrow following me everywhere. Every single day became difficult. Normal activities became overwhelming and burdensome, and I was always tired. This drove me to depend on the Lord more than ever. God answered my cries of desperation. He provided me with the grace and strength by which to meet each day. He brought me peace and joy and comfort no matter where I was, and He taught me to trust Him as the only constancy in chaos. God was utterly faithful to His promises; I tell the truth when I say I would not have come through without His help. I’m very thankful for God’s faithfulness, for all the wisdom He gave me during 2020, and for His good purposes for my suffering. The trial truly transformed me into someone living for Christ.

Over 2020, God also began the work of the gospel in my school through leading me to other Christians. Time and time again, He has guided me and enabled me to be bold for Christ and witness to others about Him. In addition, some friends and I started an online Christian forum that the Lord prospered more than we ever would have imagined. Today, the group has over 500 members. He has upheld us through the many challenges we’ve faced, and He has raised up many wise and wonderful leaders to moderate. The Lord has brought a culture of Christian fellowship, unity and encouragement there that still stands today. I am honoured and humbled to have had such a special place in all of this.

As I prepare to be baptised, I bear witness to you all that I belong to Christ, who has died and was raised from the dead. I hope and pray this was an encouragement and reminder that God is willing and able to take broken people as a treasured possession for His glory.