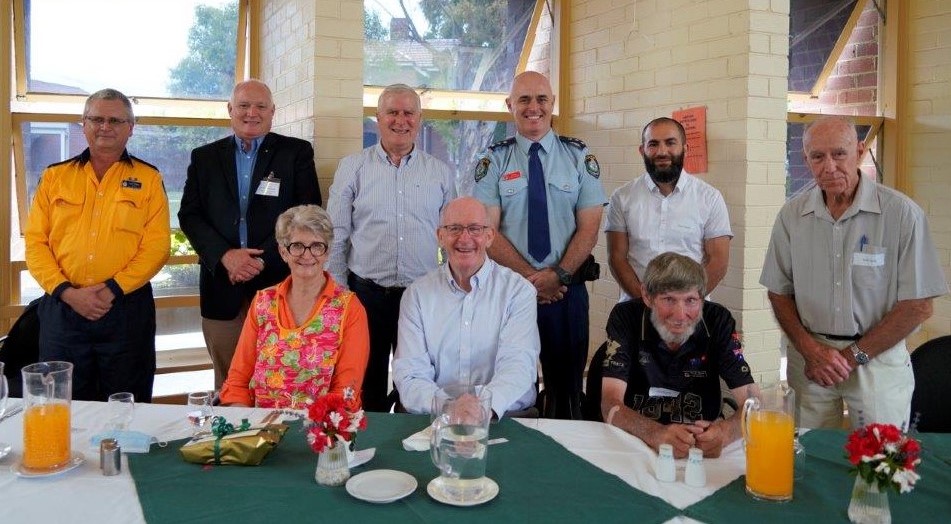 Sir Peter Cosgrove was the guest speaker at the Men’s Breakfast hosted by St John’s Anglican Church, Young, on Saturday 29 January in the church hall. This visit was extremely popular and over-subscribed.

General the Honourable Sir Peter Cosgrove AK AC(Mil) CVO MC (Retd) had a long and distinguished career, firstly as an Army officer then as our Governor-General from 2014 to 2019.

Sir Peter held the audience’s attention with his address and follow-on questions. He talked about the duties of the Governor- General and what they conveyed to the community. He mentioned the shooting down of MH17 and the terrible aftermath of that for families of lost ones, which saw him in the Netherlands to offer support and comfort to those people. He talked of his role with prisoners and indigenous communities. He shared about meeting the Queen on several occasions and how gracious a lady she was; how it was clear her interest in Australia was genuine. He said the most difficult part of his duties was being made a judge at rural shows! His talk and questions held the audience spell bound for nearly two hours.

Our local Federal Member, the Honourable Michael McCormack MP, Member for Riverina, said he was delighted to attend the Men’s Breakfast and commended Sir Peter Cosgrove on his dedicated service to our nation. In moving a vote of thanks to Sir Peter he said in part:

‘Sir Peter Cosgrove is an inspiration to all Australians and has served our country magnificently – not only as a decorated soldier and as Governor- General, but also in so many other facets of life.’

‘Inspector Adrian Matthews led the local police contingent of six officers, the police have been strong supporters of previous breakfasts and it was good to see them here again,’ said the Rector, the Venerable Neil Percival OAM.

There were men from Rotary, Lions, Fire Brigade, Police, Masonic Lodge, around 12 Vietnam veterans, Men’s Shed, Harden Galong Presbyterian Church and the Islamic community who joined this gathering for the first time plus men who responded to the various media announcements.

‘The ladies turned on a well-received breakfast of egg and bacon rolls. There wasn’t much over at the end,’ said Rob Nash who thanked the ladies for all their efforts and all who had helped in any way. The newly elected Mayor of Hilltops Council Cr Margaret Roles helped the ladies handing out meals.

Sir Peter was presented with a gift pack compiled by our local Poppa’s Fudge and Jam Factory as a token of our appreciation.

The next function is scheduled for Saturday 5 December when it is hoped that Ian McNamara of the ABC radio program Australia Allover would be the guest speaker, but that’s a long way off.