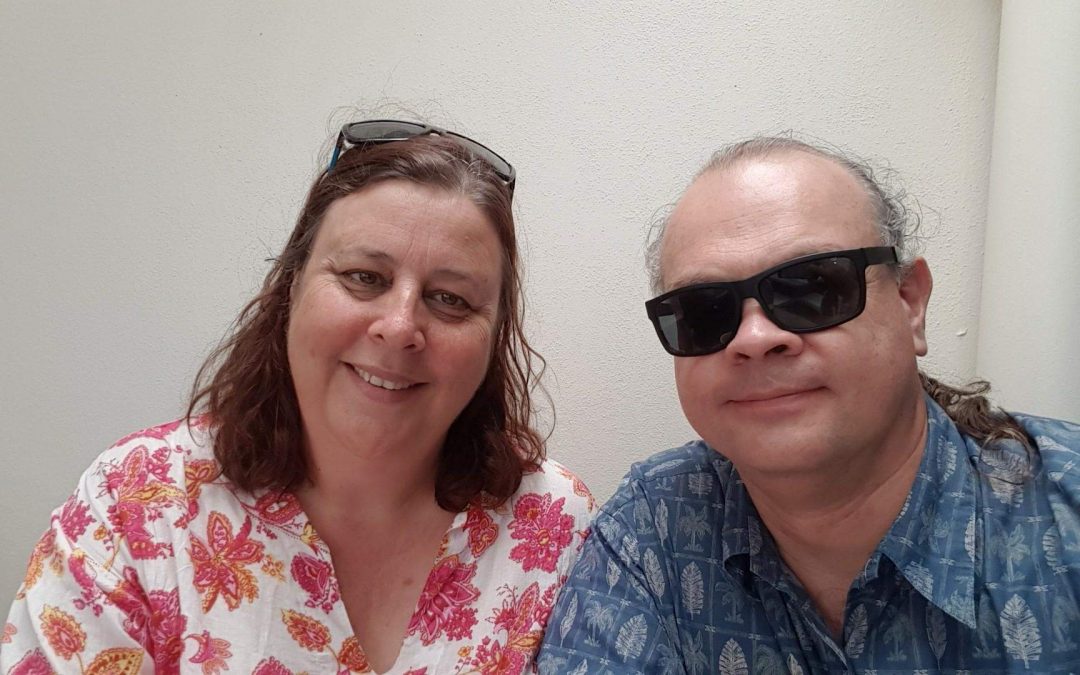 At the Synod Service on 10 April, The Venerable Tom Henderson-Brooks was collated as Diocesan Archdeacon.

Tom, tell us about yourself.

Tom: Well, though I was born in London, I grew up in Sydney. My family isn’t particularly religious. When my younger sister reported that she’d been to something called a ‘youth group’ – well I wasn’t going to be out-socialised by my younger sister! So I went along the next week. It was at St Stephen’s Anglican in Willoughby. The first week they welcomed me. The second week I left with a Bible in my hand … (The minister ‘stole’ it from the back pew of the church!) I read up to Leviticus chapter 6 before I tossed it in. Then someone told me to read the New Testament. That began a journey with Jesus. A few months later I found myself responding to the call of Christ at Randwick race course at a Billy Graham Event!

My faith grew from good Bible teaching and pastoral care in my new home church and also whilst at Sydney Uni. Most of my closest school friends became Christians. I trained and started working as a High School Teacher, which I loved. However, all through Uni I had this gnawing thought … ‘if I could spend four years learning to be a Maths Teacher, why couldn’t I spend four years learning from God’s word.’ A few years later I found myself at Moore College in Sydney as an independent student, because there was no way I was going to be an Anglican Minister!

So how did that come about?

Tom: Well I had bet a whole case of VB with a friend that I would not become an Anglican Minister, but God had other plans! In short, the Holy Spirit had to work on my heart. Five months later I found myself on staff at St John’s Darlinghurst ministering to the people of Kings Cross. It was a steep learning curve and both the hardest and most delightful decade of my life.

Did you have a family during this time? >

Tom: Yes, I’d met the love of my life Caroline at Uni and we’ve now been married for nearly 36 years. Our daughter Katie was five months old as we started at St John’s where there was just one other child about the same age. Our son Matt was born the following year and our two kids grew up in the inner city of Sydney.

When I was a kid, my parents taught me not to play with the funnel-webs in the yard. I taught my kids not to touch the needles that were thrown over our fence or left on our front door step. They got to know the local sex-workers who’d work along our street as well as some of the regular homeless men. I loved ministering the gospel in the inner city. My catch phrase was ‘bringing the love and justice of the King to the Cross’.

During this time, Caroline worked as a Dietitian at the Albion St Centre, which provided services for those living with HIV. However she always had a passion for languages so after our kids made it to school age she went back to Uni to study linguistics, eventually completing her PhD. She had worked to enable my theological studies, so it was my turn to enable her study.

What other ministries have you been involved in?

Tom: After a decade in the Cross, I took up the Parish of Bondi Beach. It couldn’t afford a minister so Anglicare underwrote the parish and I took on the role of the Anglicare Regional Manager for the South Sydney Episcopal Region, which covered all the Eastern Suburbs, inner city and inner west. The model was to grow a church through social justice, community engagement and outreach. I had the joy of seeing a number of young adults come to faith through the parish and Anglicare partnership as well as serving the needs of the local community.

After a decade in Bondi, a long time school friend and colleague was dying of cancer. His doctor had told him to make the most of his short time left. He wanted to take a holiday and sail the Aegean Sea to spend some quality time with his wife and three kids. He couldn’t find anyone to run his Anglican Parish whilst he was on leave for three months, so I left Bondi and went and ran the Parish of Nowra for three months. It was one of the most bitter-sweet periods of my life, followed by taking his funeral not long after. Often I don’t understand why God does the things that God does, but that’s why God is God and I’m not!

It was important to take a short Sabbatical after such intense periods of ministry where one has given out (individually and as a family) so much of oneself without many people getting alongside to encourage us. I think I turned down over a dozen job possibilities at this time until we felt led by God to where we believed God wanted us to be – St Philip’s South Turramurra. Back in 2009 it was a mid-sized Anglican Church with five congregations and around 300 or so adults, plus heaps of children and youth. It was a real joy to lead such a prayerful and missional church with a staff team of up to ten people at times.

During that time, in partnership with St James Turramurra, we planted WAC – Warrawee Anglican Church – in the local primary school. Green Tent was one of our annual highlights. It was a ‘beach mission’ style January holiday program that we ran in partnership with other churches, with nearly 100 youth leaders having contact with about 350 children and youth at two different locations.

In 2015, Bishop David Robinson approached me to leave Sydney for Central Queensland. The motivation was that I realised that there were more ordained Anglican Ministers in our South Turramurra parish and the surrounding neighbouring parishes, than in all of Central Queensland. I had also been moved years earlier by the testimony of a lonely sheep farmer in rural NSW. For him, church was singing hymns by himself whilst mustering on horseback. His closest church was a few hundred miles away. For the last five to six years I’ve been the Rector of the North Rockhampton Parish which comprises an area stretching 200kms north of the Fitzroy River. There were six centres including my favourite on the back patio of a farmhouse on the Anglewood Cattle Station near Mt Bison.

During that time I was also the school chaplain at Rockhampton Grammar School, a Board Director for AnglicareCQ and the Diocesan Archdeacon for Mission and Training. For the last 15 months I’ve been the Diocesan Administrator holding the reigns of the Central Queensland Diocese until the Installation of Bishop Peter Grice as the 13th Bishop of Rockhampton.

So what will you be doing in our Diocese?

Tom: That’s a great question! Firstly, I thank Bishop Mark for the opportunity to serve God in a different context. I am an unknown entity to most people in Canberra- Goulburn and we have never lived in this region before. To be honest I am apprehensive about the colder weather having come from Rockhampton, where if you’re not going to finish lawn mowing by 9am then you don’t start!

Bishop Mark and Monica started attending our Parish at South Turramurra when he took up the role as head of BCA (Bush Church Aid). They then joined our church plant team in Warawee so we got to know each other.

Bishop Mark described my role as Diocesan Archdeacon broadly as follows: ‘Bishop Carol is looking after all the clergy and ministries in our Parishes and you’ll be overseeing all our chaplains and ministries that are non-parochial.’ That is quite a broad scope as it means getting alongside all our Diocesan Chaplains in schools, hospitals, prisons and more; our Chaplains and ministries in Anglicare and our community church plants and specialised ministries like Embracing Ministries and the Sudanese churches. I’m sure there’s more I am yet to discover.

Currently we are living out of our suitcases. All our worldly possessions are in a container somewhere in Queanbeyan. And hopefully we will become Bishop Carol’s neighbour in the next fortnight.

Ultimately our prayer is that God will use the gifts he has given to us to serve, lead and grow his people, so that the name of our Lord Jesus Christ is increasingly found of the lips and written in the hearts of men, women and children in the Canberra-Goulburn Diocese.

People reassured us, before we came, that ‘it doesn’t get cold until after ANZAC Day’, but this ‘early’ cold snap has been melted by the warm welcome we have received so far. We look forward to meeting and partnering with God’s people and the wider community.