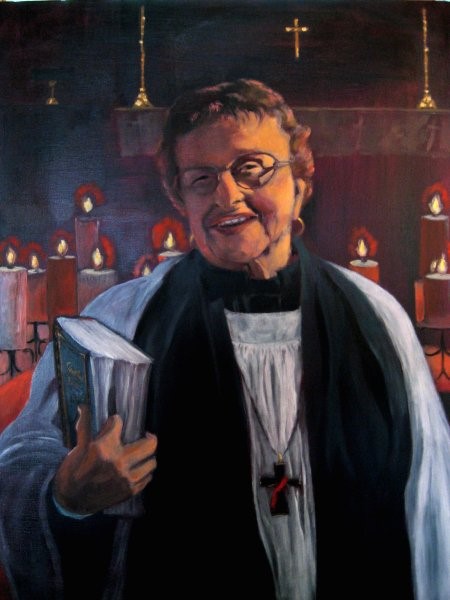 Picture of the portrait of Mary Thorn by local Queanbeyan artist Julie Ballis.

On 25th March this year Reverend Mary Thorn marked the 20th anniversary of her ordination to the diaconate. How appropriate that she was ordained on ‘Lady Day’, the feast of the Annunciation to the Blessed Virgin Mary! Her ordination took place in her home church, Christ Church Queanbeyan; it was from this parish and congregation that Mary was raised up into service, and she has served in the parish for the whole period of her ministry.

Mary came from Queensland, being born in Yeppoon. She was raised by relatives in Rockhampton, after both her parents died when she was only eight years old.

Mary and Kevin married when she was 22; they had three children, and subsequently many grandchildren and great grandchildren. Kevin served in the RAAF, and it was a posting to Fairbairn that brought them to live in Queanbeyan, in 1968. After Kevin’s period of service in Vietnam, the family chose to remain in Queanbeyan, where they had settled-in. Kevin died in 1986.

It was at the Billy Graham crusade in Sydney in 1959 that Mary gave her life to Christ. She served in lay ministry in Christ Church for many years, before it was suggested that she might be ordained as a deacon. Mary is very well known and loved by the people of Queanbeyan, through her ministry lived out in teaching scripture in schools; chaplaincy at the local hospital; regular pastoral visiting to retirement and nursing homes; and an extensive ministry to families in times of both joy and of grief, through baptisms and funerals.

Local Queanbeyan artist Julie Ballis painted a portrait of Mary, which she entered into an exhibition titled, ‘Unsung Heroes’. She said of Mary, ‘I just thought she fitted that unsung heroes title because she has done a lot of good, and has done a lot of work behind the scenes’. The portrait is now located in the Christ Church hall.

Although Mary is now retired from active ministry, with a true deacon’s heart, she continues to care for other residents of George Forbes House, where she now resides.