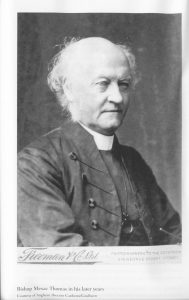 ‘We are a missionary diocese, and we have missionary work to do.’ Six years into his three-decade project, Mesac Thomas found himself endlessly stretching to meet the expanding boundaries of white settlement in New South Wales.

After his first major tour of his See, Thomas reported that ‘… this diocese must be regarded as a missionary church for some years…’. And whilst Thomas may have longed for a peaceful day in which pastoral ministry was fully funded and worshipping communities were resourced, his time in episcopal leadership was primarily about the recruitment and deployment of clergy.

Bishop Thomas sought to build a financial support base that would fund the missionary endeavours of lay people and clergy alike. He drew on his experience and contacts developed during his time as Secretary of the Colonial and Continental Church Society. Mesac Thomas was a fundraiser.

Our first Bishop was also busy establishing the structures that he felt would best enhance the local and missional work taking place in the parishes springing up in the rural south and west of New South Wales. Bishop Thomas’ strong leadership established a tone in the diocese of respect for the under-shepherd and clarity about the authority of such a role.

It is fascinating that whilst Bishop Thomas was vocal in his opposition to Roman Catholics and Dissenters, our common  diocesan life together has steered away from partisanship. Mesac Thomas’ alignment with English Evangelicalism appeared  to leave him little room for tolerance or cooperation. Even as we celebrate the formative role our first Bishop played, we can well acknowledge how a plentiful harvest draws us to labouring cooperatively with other workers our Lord has sent out.

I believe that Mesac Thomas spoke more truly than he knew: we must regard ourselves as a missionary diocese.

Although we no longer find ourselves on the edges of white settlement, or in the midst of a gold-rush population  boom, we are a diocese on mission. God’s mission is unfolding, and our part in it takes shape as we act in faith. Passionate for the life-transforming news of Jesus, Bishop Thomas formed a diocese with Jesus’ saving work as a firm foundation.