Climate and Faith: Christians for an Ethical Society 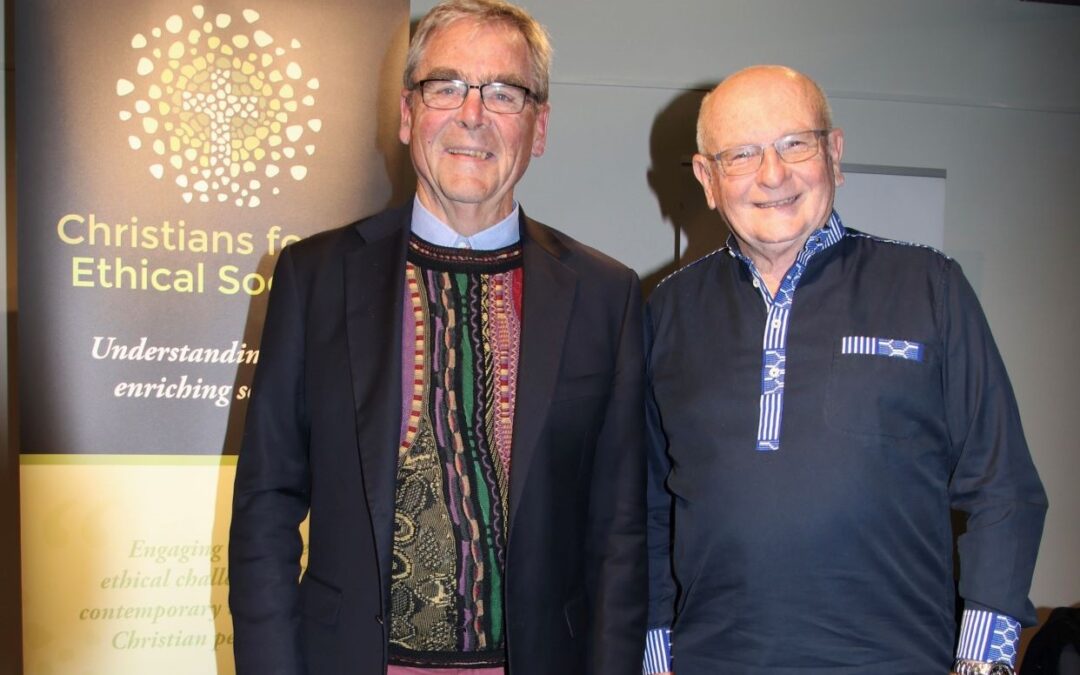 Thinking beyond the individual and the imperative for human evolution: a Christian response to climate change,
by Katy Nicholls

On a wet and very chilly night 35 people gathered at the Australian Centre for Christianity and Culture to listen to Bishop George Browning (former Anglican Bishop of Canberra and Goulburn) and Dr David Hunter (President, Othopterists’ Society and adviser to the Asia Development Bank) speak on climate change and the Christian moral imperative to act for the common good.

Bishop George’s presentation, titled ‘Is it just me’, asked the frog, ‘or is the water getting warmer’, called for an evolution in humanity. Humanity is tribal, he stated, and the consequent tribal conquering and subduing was necessary for survival until the last few centuries. In the 20th and 21st century the most harmful manifestation of tribalism is nationalism, with terrible violent results for humanity and for the integrity of the world’s ability to support us. However, for our own survival, it is ‘dawning on us that exploitation and consumerism is a feature of human irresponsible adolescence’. ‘The planet will survive without us’, he said, adding, ‘we will not survive without a healthy, richly diverse, planet. Circumstance is forcing humanity to grow up and as we grow up, we learn there is a better, more satisfying, less alienating, less violent way forward. This has of course always been the Christian view, what we might call the soul of humanity is infinitely more important than the trinkets with which we like to distract ourselves.’

Bishop George called for a change in human relationships – to that of community and planetary citizenship. He pointed out that this tipping point for humanity should not come as a surprise to Christians, it is the evolutionary change that Christ wrought in and for us. ‘We have been provided with a rhythm, a sabbath rhythm of rest and renewal, which we have largely or totally ignored’. The true goal of being a Christian and growing up as a species is ‘rediscovered through embracing the limitations that all life-giving relationships demand. To live harmoniously with others, with the natural order, indeed with oneself, is to discover again one’s appropriate place.’

The coronavirus pandemic has started us on this path, as we recognise again the value of community, the benefits of ‘socialist’ support for the vulnerable and that we are only as strong as the weakest link. ‘The year of COVID has taught us that economies cannot only survive, but flourish when the emphasis is placed on social health and cohesion rather than consumerism.’

He concluded by canvassing the implications for individuals, the economy and politics of the current human and climatic tipping point:

Finally, there was a call of hope, that the younger generation seem to be more aware of humanity’s actions and the consequences of our current path, and that globally those in power are starting to see that we need to change, to choose planetary citizenship. As Christians, in this change we will ‘rediscover the mission for which we were born and in which we will rediscover our delight’.

In reply, Dr Hunter spelled out both the moral imperative for Christians to act to address climate change for the common good, and the scientific evidence that there are ways and means to meet that obligation.

He summarised the current global political and scientific information, from the recent statement of the UN Secretary General that the world is reaching the point of no return on climate change to a summary of some of the worrying tipping points. These include those arising from the temperatures in the Arctic having risen by 4-5 degrees: the melting of Arctic ice results in an ocean that absorbs rather than reflects sunlight and heat and there is also a consequent more rapid melting of permafrost, releasing methane, a potent greenhouse gas, which will lead to runaway melting of glaciers and potentially the Greenland ice sheet. The consequences for humans range from sea level rise to changed rainfall patterns globally disrupting food production, to the replacement of many temperate forests by subtropical forests with the replacement occurring by fire. Already insurance premiums in zones at risk are becoming unaffordable.

On the other hand, global leaders are starting to recognise the risks and act more seriously, and Australian state governments and companies are increasingly investing in renewable electricity, including for export to Singapore.

He concluded with a call for a recognition of individual responsibility to do our part in personal action in reducing our footprint and in advocacy, and a paraphrase of the words of Moses ‘I set before YOU this day a choice: and this is that choice: do right for the good of us here in Australia and for the good of people all over the world or alternatively, abrogate your responsibilities and we all suffer the consequences. The choice is yours.’

Questions from the audience included ones seeking more information on Bishop George’s views on capitalism and the assumption of continuous growth, and on the recent tendency to government by decree. Questioners also asked about the role of the established churches and what we as individuals should do. The key message in response was that we as Christians should inform ourselves, engage in the debates in the public sphere, and choose to be true to the message of Jesus – to stand with the poor, the needy and downtrodden, and be on the side of the environment. The audience was urged to speak up, everywhere, in all circumstances, in issues that are contrary to God’s love.

Further information about the Christians for an Ethical Society can be found at https://ces.org.au/