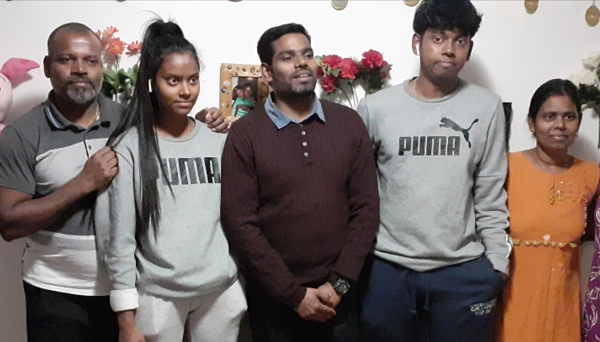 In March this year, I wrote about a Sri Lankan refugee family, devastated following the denial by the Tribunal of their appeal to stay in Australia. They had been here for ten years, working, studying, paying taxes, and praying that they would find a safe haven here in our peaceful and bountiful land.

Let me tell you a bit more about them. There’s Maria, aged 17, finishing year 11 in her Canberra school. Not only is she doing well academically, Maria is a formidable cricket player. She has received a scholarship which provides professional coaching. Maria would really love to be able to play for Australia.

Then there’s Lawrence, aged 19. Lawrence is in his first year of nursing at Canberra Institute of Technology. Lawrence will be qualified to work in 18 months once he has his Diploma in Nursing. He then wants to work to put himself through further training to become a Registered Nurse.

Selva, the dad, was a fisherman in Sri Lanka and is skilled in many areas. Selva, with a friend, runs a gardening and mowing business in Canberra. Juliat, the mum, works as a cleaner in aged care. The family also grieves the loss of their two-year-old son, nicknamed ‘little bird’, who died of congenital heart disease before they made their fateful trip in 2011.

The family’s hopes rose in early April this year, when they found a lawyer who would represent them in a challenge to the denial of their appeal. The challenge centred on evidence presented at the Tribunal that was discounted. They received a bridging visa and waited anxiously for their case to be heard.

The case came up on the 20th of October. After a week’s consideration by the judge, they received the verdict. Application dismissed. The case was lost. Another plunge into grief and despair, not only for the family, but for those who love and support them.

There is one more avenue of appeal – the Federal Court. However, the advice of the lawyer is that it would be costly, with even less chance of success. With each appeal, he says, the chances of winning become less. I asked for an estimate of the costs – filing, representation, and the cost to lose. All up, it could be anything from $25,000- $50,000, depending on whether there is a barrister involved, and the costs from the other side.

Depressing, isn’t it? But what do you do? At the very least, if we could raise the funds, it would buy some more time – time to perhaps lobby the government, or to find another way forward. Time to have them with us for a little longer. Time perhaps, for Lawrence to finish his Diploma in Nursing. Time for Maria to finish school.

What is the price of love? If we had a loved one with terminal cancer, who wanted to fight their disease, would we deny them treatment because of the expense? Because it was unlikely to succeed? I doubt it. For those we love, we are sacrificial. We will do whatever it takes to preserve their life, and to keep them with us.

Isn’t that what Jesus said? Greater love has no one than this, that they lay down their life for their friend. Jesus paid the ultimate price, giving his life for us, so that as we trust in him, we may be with him eternally.

As I brought my despair to the Lord in prayer, I felt his gentle reminder that I had more to give – so this I will do. My prayer is that others might too, so that this family has another chance to find peace and a place to call home in Australia.

Please pray with me that this may be so.